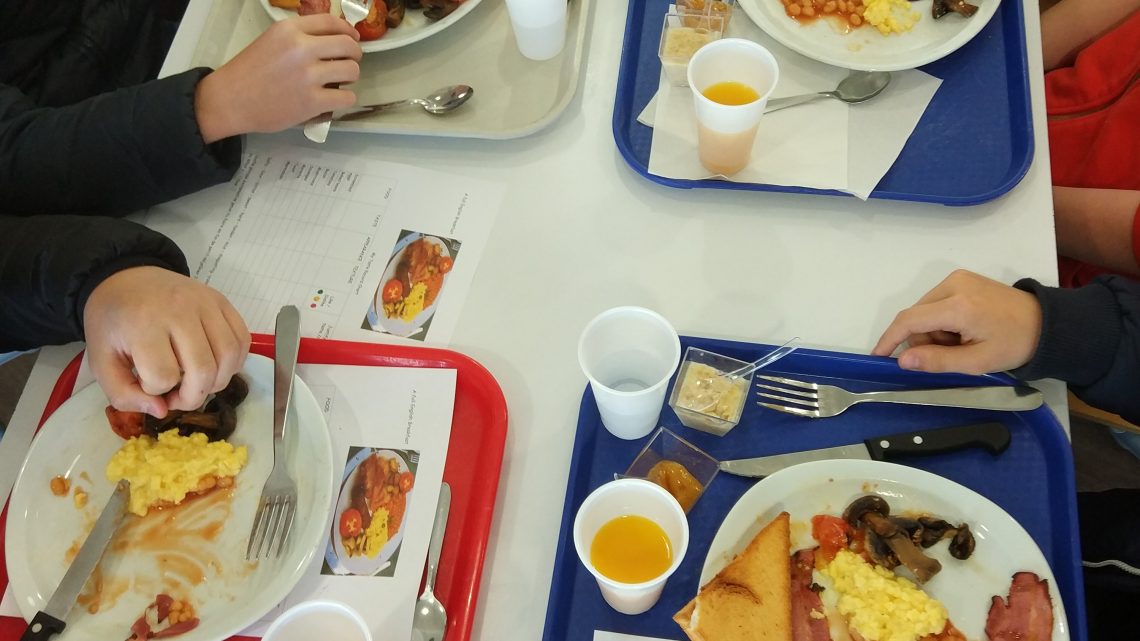 An English Breakfast at school

“Hope makes a good breakfast. Eat plenty of it.” 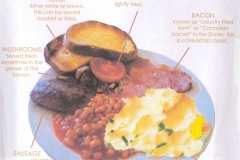 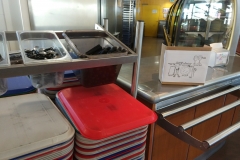 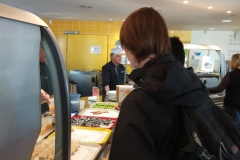 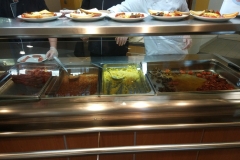 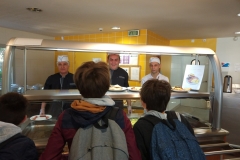 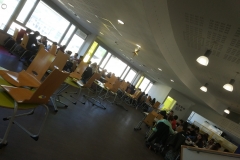 What happened on 27th March ?

In the morning from 8 : 30 to 9:30, we joined the 4°A B to eat an English breakfast at the canteen . There were scrambled eggs (oeufs brouillés) , backed beans ( haricots à la tomate : yummy ! ), tomatoes, bacon, mushrooms (champignons), sausages (saucises), marmite ( it was very salty ! ), toasts, marmalade (confiture à l’orange), honey (miel) , a glass of orange juice, tea, milk … Lily presented this meal. We saw the chef cook. He was happy and we too. It was so good everybody asked for more. Oh ! It’s better than we had thought ! We prefer the English breakfast to the French breakfast.

It was such a tasty breakfast ! Why not eat it once again !?!

We had an English breakfast in our middle school . The cooks  prepared this delicious breakfast for us . There was a lot of dishes, the best was the toasts with butter and honey . There were also sausages (that was not so good),orange juice, bacon (it was delicious),scrambled eggs, baked beans, tomatoes, mushrooms, and black tea, … We tasted marmelade, it was very bitter (amer) and not too good !

Why wouldn’t we eat an English Breakfast ?

An English Breakfast ? Good idea !! So on the Wednesday 27th March, we ate a fabulous English breakfast, organised by our english teacher, Mrs. Bronner. In the past, English people used to eat this breakfast very often. Now, they eat it only on certain Sundays. At 8.00 a .m., we went to the canteen, with the 4A.

The chef, Mr Lamaison cooked a typical breakfast. There were scrambled eggs with bacon and sausages. There were a few vegetables like tomatoes and mushrooms. We put baked beans on crunchy toasts. It was delicious !!

After, there was porridge, it’s oat flakes with hot milk and sugar. We didn’t like it because it had a slimy texture. We also ate marmelade, it’s very bitter (orange jam). Mrs Bronner brought an English speciality, marmite. It is a brown paste, very salty and sticky, and it has a very bad taste !! Only three students like this !

How wonderful it was ! It was a very good meal, and we were so happy, and excited !! This event was a fabulous idea. Thank you so much for this amazing breakfast  Mrs. Bronner!!

How was the English breakfast ?

It was in the morning of Wednesday 27th March in the canteen of our college that we had a breakfast organized by our English teacher : Ms Bronner. She organized a full English breakfast because she wanted us to discover the British culture.  After the breakfast some got a stomachache, two got depressive and there were three who felt completely ill. 🙂  No seriously, some of it was good and other was disgusting !…. well ….

We asked the views of the others: some persons liked it, others disliked it :

«-Hello, can you say your opinion about the English breakfast ?

-The intention was good but some of it was disgusting.

-The taste of the marmite spread was horrible, the taste of mushrooms wasn’t good because they were not warm enough.»

-Yes, I liked the English breakfast because it is healthy and I was full after it.

-I liked the bacon, the sausages and the tomatoes but the marmite was so salty it could make a glacier melt !.»

An English breakfast without marmite ? …IMPOSSIBLE !

On Wednesday 27th of March, we had a full english breakfast at school. It was composed of scrambled eggs, a slice of bacon, sausages, mushrooms, tomatoes, toasts, baked beans and marmelade, and… marmite !

French people usually dislike it: out of a class of 29 only 3 like it. Why don’t you taste it ?

Why don’t we talk about our English breakfast ?

We took an English breakfast last Wednesday (27 March 2019) at our school with my friends.

It was just great ! It was such a yummy breakfast. It was very interesting because there were many different flavors.

What about eating an English breakfast ?

An English Breakfast ? What is it composed of ?

Wednesday, March 27th, Mrs Bronner and her classes (4AB, 4FG) had an English breakfast in the canteen of our school.

We ate scrambled eggs, baked beans, tomatoes, bacon, mushrooms, sausages, Marmite, toasts with butter or marmalade, a little cup of porridge and we drank orange juice and English tea, well… if we wanted to.

We discovered a new type of breakfast, it was really interesting !

We tasted Marmite, it’s very salty and a bit special. Only two persons liked it ! What about you ? Could you taste Marmite ?

Porridge had a weird texture, but it was delicious because it’s very sweet.

But, we guess we get used to eating these English specialities when we start young.

This experience was really cool, we loved it !!

Breakfast is the most important meal of the day. We took an English breakfast at school. We ate bacon, tomatoes, sausages, toast white butter, marmelade, marmite, milk, tea and some orange juice.

We ate an English breakfast to discover a new taste. It was a mix of salty and sweet flavours.

It was so good you should taste it ! 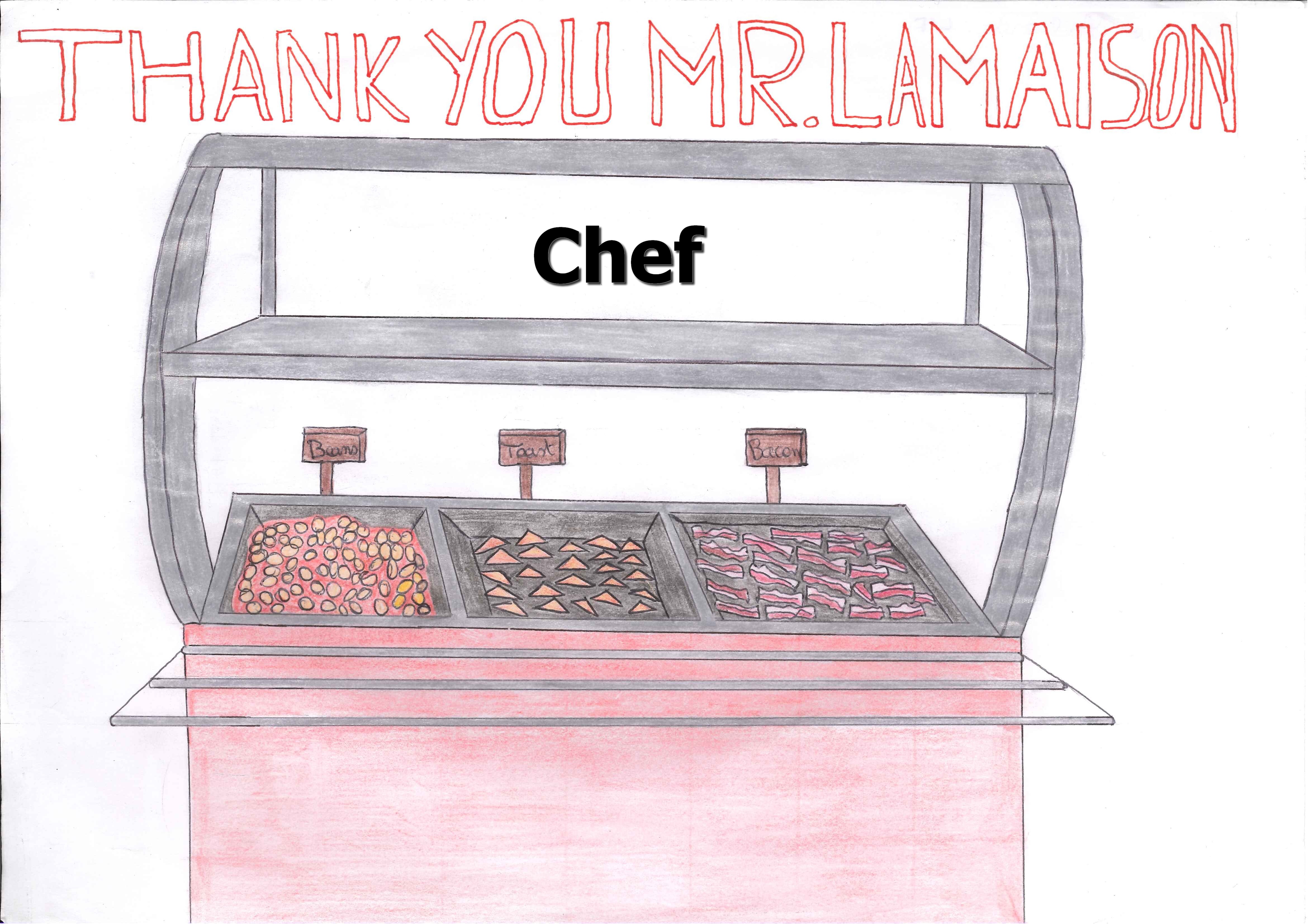